Lubuntu, unlike Ubuntu, is a light and efficient system that has no launcher on its own. Whilst Ubuntu users are given Dash to use, Lubuntu users are instead given the opportunity to choose what kind of launcher suits them. A dock is not sufficient at this day and age. Imagine you tell your computer ‘Go!’ but you still have to open a folder, find the file, and double click on it. Now all you need to do is tell the computer what you want and it will execute it for you. 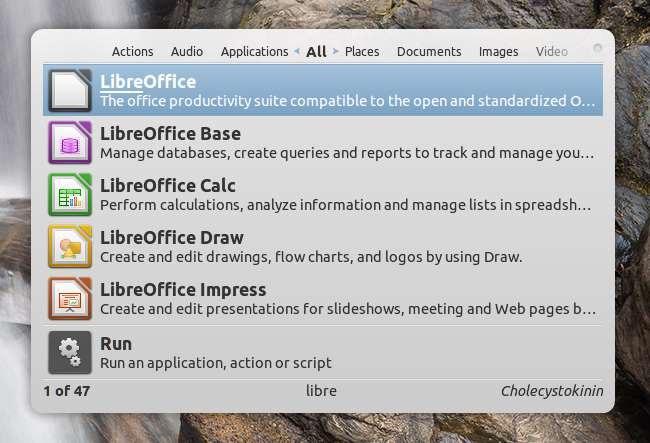 Typing ‘libre’ shows all the options for LibreOffice

Most people would find that the Zeitgeist Indexing system to be the most useful and that allows the person to search for ANY file in the computer system. Thus springs the ‘type what you want’ system. The software has been removed from the default repository in 14.04 and most users are unable to install/make the program work on 14.04. This guide covers the ability of the program as well as on how to install and troubleshoot the software on 14.04.

Our Launcher of Choice, the argument

The only software available is Synapse Application Launcher. This allows you to ‘type what you want’ and access your programs and files. The program is fast and responsive and is a must-have for Lubuntu users. Other software like Kupfer or Launchy do not use the Zeitgeist system, and are thus not able to access some folders or subsections of menus.

Although one may argue that Zeitgeist takes up more ram, in most cases, Zeitgeist runs on the background anyway, so that point is irrelevant unless you disable Zeitgeist. Given the amount of ram available these days, this should not even be a valid dispute.

Apart from opening programs, the launcher can also open a google page on your default browser if it is unable to find the term you want, or you can scroll to the left under actions to open your browser to search for the term you have typed in Synapse.

Synapse is able to work with background software too for example Banshee Media Player, Messengers, etc. There is also a dictionary plugin for you to search meaning of words quickly. However, not as the plugins are designed to run on GNOME, some of them do not work. That is why we recommend using Banshee Media Player as the RhythmBox plugin is buggy. In Lubuntu 14.04 XELLINK Edition, Cairo Dock already controls these programs for you.

The default launch mechanism after self installation is ‘ctrl + space’. However, we recommend to replace this with ‘alt + F2’. This is the default for Lubuntu XELLINK Edition and the option can be configured under CompizConfig Settings Manager.

In this case, Synapse is set under Command 3

Synapse comes with a few stock themes. We opt for the Virgilio theme as it allows all the results to be displayed instead of needing to type the ‘down’ key. 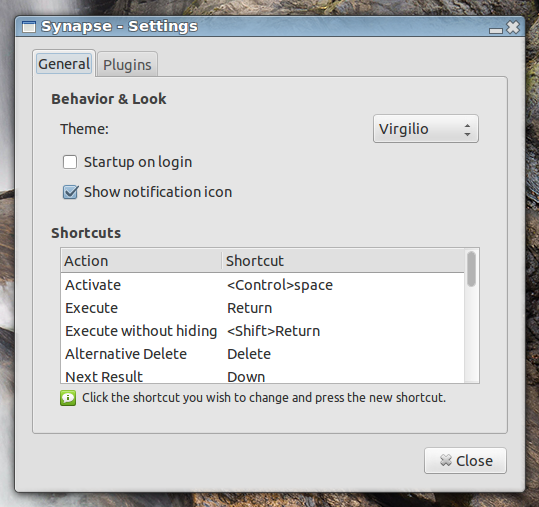 I do not know of any downloadable themes still available now since the only version out is ‘testing’ and we’re not really sure if this will work with 16:04. In fact it has been in the bleeding edge version for a long time. You can however customise certain themes to change its colour to better suit your desktop.

Noobslab.com shows a grey theme that I have not seen before. As the testing version is unable to work with my version of 14.04, I would also be interested to know if there are new skins in the testing version. You may refer to it at the link below.

Installation and trouble shooting in Lubuntu 14.04

A more stable version available on 13.10 would be guaranteed to work but the ‘deb’ file is difficult to find. I have made the .deb file available below.

To install the 0.2.10 version:
1. Remove any other versions of synapse if you had attempted installation before.
2.Download the .deb file here.
3. Install the .deb file.
4. Open Synaptic Package manager and lock the version if you had installed a non-working version before. This is to prevent updates from messing up with your version of synapse.

The optional step of locking the Synapse version prevents buggy testing versions from overwriting if you had previously tested with the ‘bleeding edge’ version.

Installing the bleeding edge version (do at your own risk)

The installation is to add the synapse repositories, update and install,

However, the above may not work for many users using 14.04. I have not had any problems with desktops but in two laptops, this has failed to run. This is expected as the only version in the synapse repositories available for 14.04 at the time of writing is the ‘bleeding edge’ version which is under testing. Therefore our recommended installation method would still be using the .deb file above which is a more stable version.

It is unfortunate that the last update for Synapse, like the second best contender, Kupfer, was in 2012 and development is unlikely to continue. However, applications come and go according to user needs and there are upcoming contenders such as ‘Albert’. ‘Albert’ is still in Alpha stage but can be downloaded here.

Like Loading...
This entry was posted in Review, Software, Tutorials and tagged 14.04, Installing, Lubuntu, synapse application launcher. Bookmark the permalink.