A decision tree can predict a particular target or response. The decision tree below was made by me using machine learning to test against several relationships which can be found in the National Longitudinal Study of Adolescent Health survey performed in the United States. 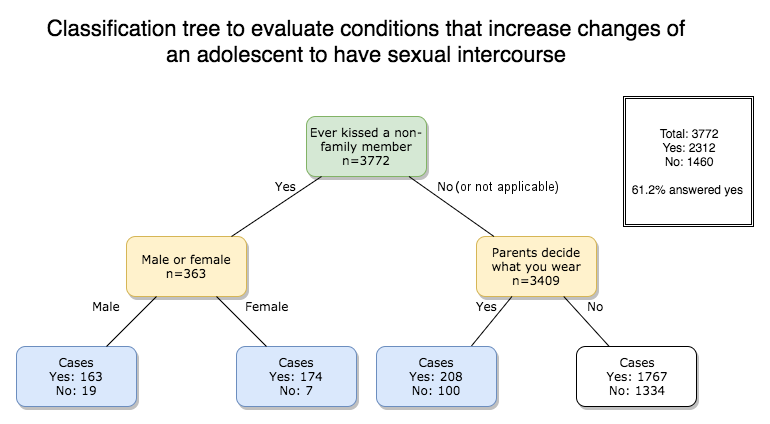 The syntax is provided at the end of the post.

The tree was subsequently further selectively pruned to give the final image seen at the start of the post. Three variables were selected: Sex, whether the individual kissed a non-relative and if parents made decisions on what they wear. The four boxes at the bottom represent the results. In cases where the percentage of those who have had sexual intercourse has exceeded the baseline of 61%, the boxes are highlighted in blue.

The modified dataset is provided here.

Only in one category did the baseline remain lower, at 56%. This box is coloured white, which represents individuals who have not kissed a stranger and whose parents have given them freedom in what they wear. It will be interesting to further evaluate the trust relationship between the individual and the parent(s).

The overall accuracy is about 61%. Repeating the steps will produce almost similar accuracy but you will notice that this fluctuates slightly along with the true positives, true negatives, false positives and false positives. This is further explored in the next post.

The syntax is as follows which will generate a .dot file which can then be used to create a png image or PDF either using python itself or with a simple dot command:

Subsequently, run the following command in a terminal to convert the dot file into a png:

Pruning can be done either by selecting the best variables manually or allowing the machine to do it for you. In this case, use the syntax (max_leaf_nodes=n) under classifier=DecisionTreeClassifier, which will generate a completely different tree like so:

After removing cases where individuals did not answer either yes or no in the question “Have you kissed a non-family member?”, the tree is now as follows: