TensorFlow is developed by Google and released as an open source software library for machine learning, specifically to training neural networks to to detect and decipher patterns and correlations. I would not say that the software would be analogous to human reasoning, but the behavior is more akin to teaching a dog to follow commands. However, the more data you have, the smarter your software is, making your deep neural network smarter than a dog, slightly dumber than a human, but probably more consistent than both. Today, the tutorial will be based on reading chest radiographs.

The very first lesson taught to new radiology trainees with regards to the chest radiograph will be the heart size. Most people use a cardiothoracic ratio of 50-55% to determine if the heart is enlarged provided the film is performed PA-erect. More experienced radiologists incorporate heart morphology, depth of inspiration and sometimes commit to calling hearts on AP images normal in size or enlarged. We will do the same, we will teach our deep neural network how to learn to read chest radiographs and then discuss on the practical implications on improving the software to assess heart size better.

The use of Tensorflow requires basic understanding of Linux/Mac, the use of command lines as well as good knowledge of Python. This is not available on Windows but can be run under a virtual machine on Windows, of which I recommend Ubuntu/Lubuntu. I have run the software on both Mac and Linux and will show images of both. I used Docker for Mac and PIP on Linux. There are many other methods to install Tensorflow apart from Docker and PIP. As there are more Mac users at the time of writing, this tutorial will be covering using Docker on Mac.

First, install Docker. Download the DMG and drag the icon to your applications folder. Give the software rights to run and Docker should load in the background. 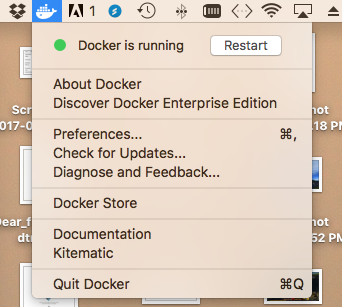 Next, open terminal and run the following command.

Remember just like teaching a dog how to sit, the software requires you to tell it what sit actually means. A few folders have to be created and these folder names naturally serve as classification titles.

The folder has two folders within, one is ‘normal’, consisting of 27 chest radiographs with normal heart sizes and the other ‘large’ which consists of 29 chest radiographs of large hearts. The samples are extracted from https://openi.nlm.nih.gov/.

Now that you have the Tensorflow training code, it is time to train your software.

This will take “some” time. The trained data will be stored somewhere in the ‘tf_files’ folder. You may adjust the number of training steps in the code to cut down time.

There is a certain code to follow for the python software. Fortunately for you I have put it in my dropbox and you may download it here. Place it in your ‘tf_files’ folder.

In Docker, run the command

The higher score means the software recognise the heart size as normal rather than large, which is given a very low score.

This runs the python file to read one of the images that we have trained it with. You can also use a new image and ask it to read.

Multilayered AI can first classify images into suboptimal (AP, supine or inadequate inspiratory effort) or optimal. Optimal images can be easily classified as large or small. Suboptimal images will be evaluated further, and in cases which are ambiguous or the large and small size scores are too close, we can classify those as ‘unable to assess’.

a simple equation would be

HeartLargescore – HeartSmallscore = HeartSizedifference, if range <0.3 or -0.3, then a text is generated: “The heart size cannot be accurately assessed in this projection.”

Realistically, the software is only viable in a Linux server with assistance of an Nvidia GPU to speed up the process. As most RIS software is on windows with no/weak Nvidia graphics card, it is a better option to transfer those images into a Linux Server, generate the results and resend the results back to RIS using a macro software.

Remember to activate the Tensorflow environment if using PIP installation.

Feel free to ask any questions in the comments section or if you encounter any difficulties.